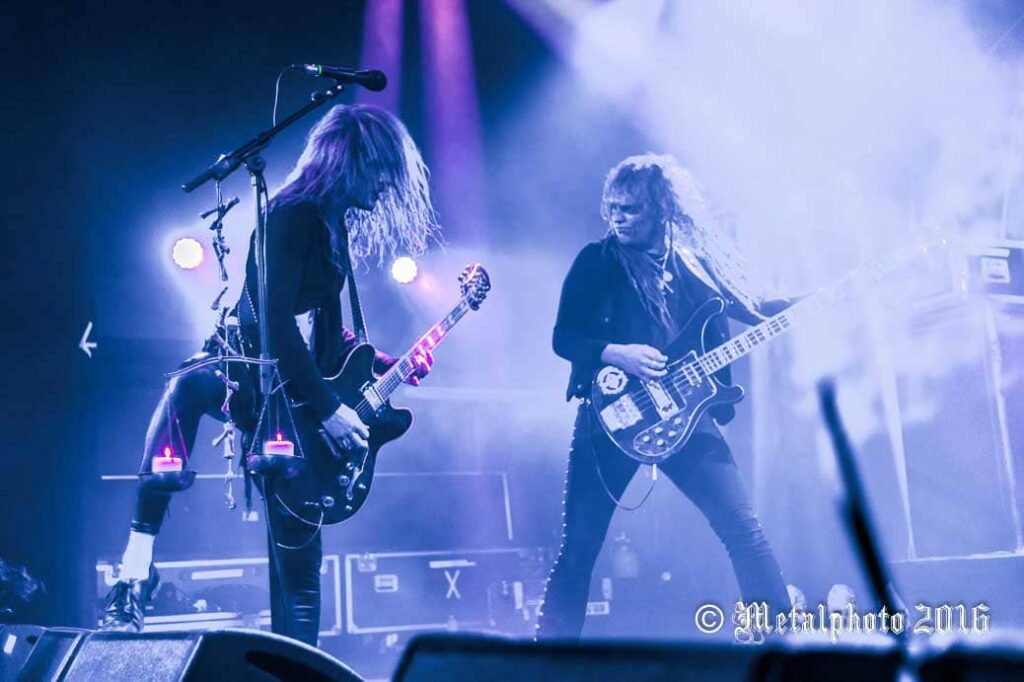 Our contributor Russell is Metalphoto´s walking Metal Encyclopedia. Not only that, he has a nose for spotting emerging talent. Like when Wolves in the Throneroom was unknown in Europe, he introduced me to their music. When Ghost was still singing off pitch in obscure venues, we went there together and, unlike me, hé saw their great commercial potential . And the list is much longer, dating back almost two decades, but I will not bother you with it, my point has been made clear, I think.

When TRIBULATION was announced to play in pop temple Doornroosje, in Nijmegen (NL), and Russell told me to go and see them, I did not hestitate to follow his advice . Because he said to me that they are hot and – what appealed to me most – they sound very much like my favorite band Dissection .
The EP Melancholia, that I listened to in preparation, already confirmed this description and so did their life performance at Doornroosje. One particular phrase came to my mind that seems appropriate to describe my experience in short : ‘we have just had the pleasure of witnessing an emerging star that is going to be great, very great in the near future’.

Tribulation is a Swedish metal band that is currently touring Europe with their “The Wailing Dead” Tour. The band was founded in 2004. It’s members are Johannes Andersson – Bass and Vocals, Adam Zaars, Guitars Jonathan Hultén, Guitars and Jakob Ljungberg, drums.

The voice of the vocalist is very much like that of his late Swedish colleague, the legendary and infamous Jon Nödtveidt of Dissection; the melodic lines and guitar riffs and guitar solos with the typical sound of the Gibson Les Paul, remember us of Dissection, but the execution is more sophisticated. The atmosphere the band creates on stage is both dark mystical and vibrant. The dim lighting and burning incense support the music well. Unlike the relatively static and detached performances of the late great Dissection, this band’s guitarist Jonathan Hultén jumps around merrily and lively on stage, seeking contact with the audience, while doing so. His peers follow this behaviour but more subdued.

Only a select audience of some 250 people was present in Doornroosje. These metal fans knew what they were coming for, they were dedicated and very focussed on the performance. This made the atmosphere in the club intimate and pleasant. The bands mystical auro therefore could come into full play. We highly enjoyed this act and we compliment the Dutchbooking agent Fortarock with their excellent choice of programming.
Check out the exclusive photo report of the show by clicking here.

Manage Cookie Consent
To provide the best experiences, we use technologies like cookies to store and/or access device information. Consenting to these technologies will allow us to process data such as browsing behavior or unique IDs on this site. Not consenting or withdrawing consent, may adversely affect certain features and functions.
Beheer opties Beheer diensten Beheer leveranciers Lees meer over deze doeleinden
View preferences
{title} {title} {title}
X