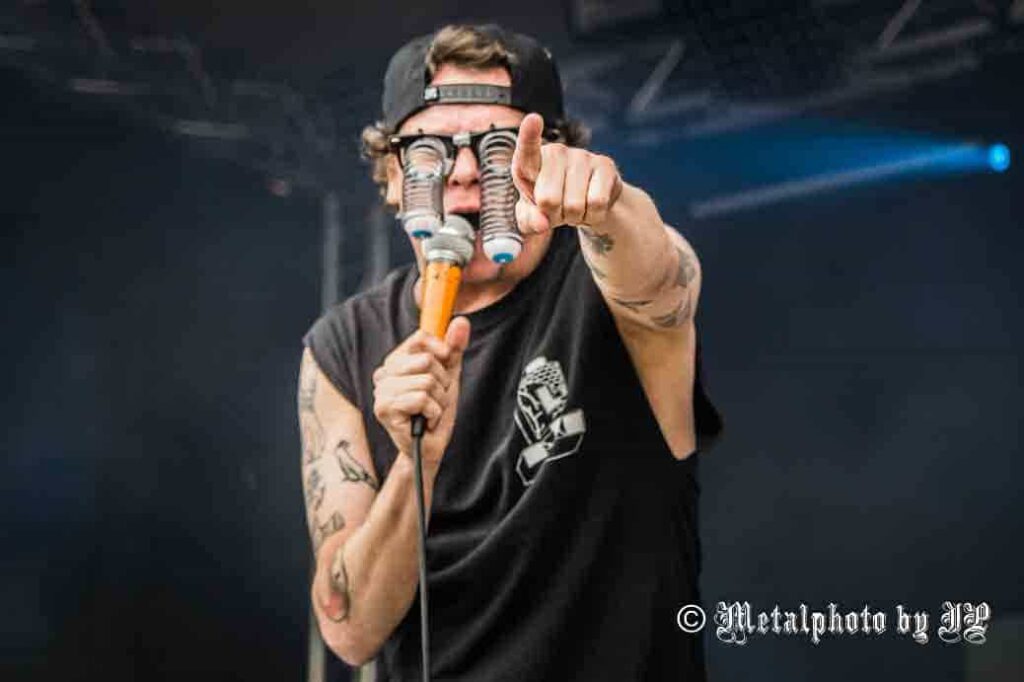 For this 11th edition of the metal festival DOKK’EM OPEN AIR, the entire Dokkem organisation has done their utmost effort to compile a great and varied line up. With names such as Testament, Soilwork, Dragonforce, Moonspell and Doro.

Besides at the ROCK HAND stage, one could also enjoy a piece of Dokkum at the PARTY stage. There was plenty of room for entertainment thanks to bands like SLEEËR, THE HELL PATROL, D.R.D, KKKKHHHRROME, MANU ARMATA and of course the exciting show of the fire-spitting sexy ladies of the DRAGON GIRLS.

There was never a dull moment with the traditional games of ‘Wheel of Steel’ and ‘Grunting for Tokens’. And if you missed that, there always was Metal Karaoke to show off your talent or you could play an air solo on inflatable guitars.

Right after the ‘Night of Dokkem’ metalheads, in large numbers, went to the field to be fueled with more metal. It was a beautiful and sunny day! 13 STEPS, played at noon, being the first appearance of the day. Followed by BLIKSEM, HEIDEVOLK, RAVEN, GRAVE, PRIMORDIAL, and SOILWORK. The headliner on Friday was the legendary band from the San Fransisco Bay Area (USA), TESTAMENT. They made their first appearance in 2013 at this festival and this year they returned to trash the hell out of DOA again. But unfortunately, due to a technical malfunction, TESTAMENT couldn’t perform on the main stage. In no time the Dokkem crew moved everything to the Party stage so that they could play there. A ‘huge’ and highly talented band on a small stage. A sight that is forever etched in our memories !

After a successful Friday and a hell of a midnight party at the Frisian Metal bus, metalheads gathered again on the campingfield for coffee and BLASTBEATS FOR BREAKFAST. They have been served a generous portion of metal and energetic vibes, which proved to be an awfully good remedy against a hangover! The Frisian band KJELD was the opening act of that rainy saturday, followed by the Dutch killing machine IZEGRIM.

INSANITY ALERT was the surprise of the day! A trash band from Austria with S.O.D., D.R.I., Nuclear Assault influences. They trashed Dokkem out like no other with their hits ‘Glorious Trash’ and ‘Run to the Pit, mosh for your life’.
The lovers of HM2-sound also had a piece of swedish old school death metal from the giants of ENTRAILS and ENTOMBED.

MOONSPELL has put down a smashing show, like we’re used from these Portugese stars. After their performance the men gathered backstage to watch the exciting soccer match of Portugal against Croatia. We can conclude that they went back to Portugal very satisfied, after a great deliverance at Dokkem and the fact that their country classified for the EU’s quarter finals.
The British power metal band DRAGONFORCE, was less fortunate. They performed an excellent show for all their fans. Only on the way back home, The British Airways lost all Herman Li’s guitars at Amsterdam Schiphol. We hope they will be returned to him soon without damage.

DORO and FINTROLL were the headliners on Saturday night.

Finally DOA has managed to bring The Queen of Heavy Metal to Dokkum. Doro Pesch has been in the heavymetal scene for over 30 years , has sold millions of albums, has given numerous concerts worldwide and has worked with great and legendary artists like Lemmy, Ronny James Dio, Amon Amarth, Tarja Turunen, Judas Priest and Twisted Sister. Fans enjoyed songs like ‘Für immer’, ‘We are the Metalhead’ and ‘All we are’. Another pleasant surprise was a rousing and incredibly awesome cover of Judas Priest ‘Breaking the Law’ in a Doro jacket.

The 11th edition of Dokk’em Open Air on June 25th would be the last, as previously divulged by the organisation. We are keeping our hopes high for this great festival to continue. Thank you Dokk’em for all those years of fun and metal madness.

Click here to go to the full photoreport with 200 pictures of Dokk’em Open Air 2006 by photographer Jeanny Petrocchi of Metalphoto.

Manage Cookie Consent
To provide the best experiences, we use technologies like cookies to store and/or access device information. Consenting to these technologies will allow us to process data such as browsing behavior or unique IDs on this site. Not consenting or withdrawing consent, may adversely affect certain features and functions.
Beheer opties Beheer diensten Beheer leveranciers Lees meer over deze doeleinden
View preferences
{title} {title} {title}
X